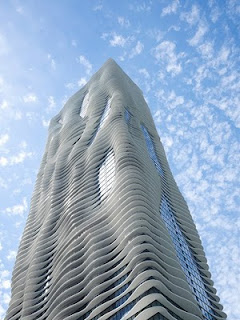 Jeanne Gang is the founder and principal of Studio Gang Architects, a rising international practice based in Chicago since 1997. Recent projects include the highly acclaimed Aqua Tower, which was named the Emporis Skyscraper of the Year in 2009; the Northerly Island framework plan; the Nature Boardwalk at Lincoln Park Zoo; and Columbia College Chicago’s Media Production Center. Gang was just named a 2011 MacArthur Fellow (the so-called “Genius Award”) for “challenging the aesthetic and technical possibilities of the art form in a wide range of structures.”


Studio Gang conceives of itself as a collective space for architects, designers, and thinkers, which “acts as a lab for testing ideas on varying scales: from cities to environments to individual buildings’ unique material properties.”

The firm’s work has been published and exhibited both nationally and internationally, most notably at the International Venice Biennale, the Smithsonian Institution’s National Building Museum, and the Art Institute of Chicago.

Tickets are required for admission to League programs. Tickets are free for League members; $15 for non-members. Members may reserve a ticket by e-mailing: rsvp@archleague.org. Member tickets will be held at the check-in desk; unclaimed tickets will be released fifteen minutes after the start of the program. Non-members may purchase tickets here from October 5 until 3:00 p.m. the day of the program.

Co-sponsored by The Irwin S. Chanin School of Architecture of The Cooper Union. AIA and New York State continuing education credits are available.

League programs are made possible, in part, by public funds from the National Endowment for the Arts, the New York State Council on the Arts, a State Agency; and the New York City Department of Cultural Affairs, in partnership with the City Council.
Posted by vina at 10:03 AM

black, red, and white are my colors. the colors that will make me seen because I'm always invisible. invisible not to be inferior but to be the mastermind. tell and reveal yourself in front of me, then I'll be able to know what you will do in the future. it's not sixth sense, just being good at feeling people's feel, and thinking their minds, then predict for people's actions. not rich, not pretty, not smartie, I'm just an old ugly broke fat lady. so I'm just being kind, it's the only treasure I have. I've lived for 30 years, with the goal had achieved for my precious persons, and for another 30 years I'll just being kind. Don't mind the pictures that often goes out of the box, because it's just the way I think. Yes, I'm wild, hard to handle, but I know the rules. and don't mind the capital letters, I'm just human..

saved my life by searching

let me know about you

enjoy ! let this song end before you click and enjoying the video clips category