here's a dialog between a simple lovable man who's actually realizing what he had done wrong, regretting, and tries to make a mend to be a wise trustful one... with an old friend

He: working and preparing a life for Virgi is the only thing that's right in my life. I lost all, company, house, car, bikes, wife, friends.
An old friend: Why don't you make yourself pious, you'll get them back in no time.

He: that'd be a great idea. But not my ex-wife, she's difficult and she's already married.

An old friend: Well, there'll be another. You're young, not ugly, smart, most iimportant thing, she should be a new mom for Virgi. You know step dad... not always safe.

He: LOL, not ugly... oh, I thought that through. Virgi should be with me when she grows up. I'm the first man who has to be there for her.

An old man: That ! is a man! After all, you're the last man standing. You're getting better, while the others don't.
He: Well, I try my best

-adapted from Darkly Dreaming Dexter-
Posted by vina at 9:11 PM No comments: Links to this post 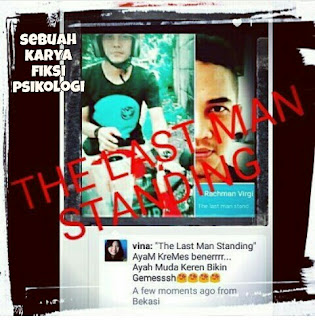 "Science without Religion is lame. Religion without Science is Blind" -Albert Einstein-

Posted by vina at 9:11 PM No comments: Links to this post

black, red, and white are my colors. the colors that will make me seen because I'm always invisible. invisible not to be inferior but to be the mastermind. tell and reveal yourself in front of me, then I'll be able to know what you will do in the future. it's not sixth sense, just being good at feeling people's feel, and thinking their minds, then predict for people's actions. not rich, not pretty, not smartie, I'm just an old ugly broke fat lady. so I'm just being kind, it's the only treasure I have. I've lived for 30 years, with the goal had achieved for my precious persons, and for another 30 years I'll just being kind. Don't mind the pictures that often goes out of the box, because it's just the way I think. Yes, I'm wild, hard to handle, but I know the rules. and don't mind the capital letters, I'm just human..

saved my life by searching

let me know about you

enjoy ! let this song end before you click and enjoying the video clips category